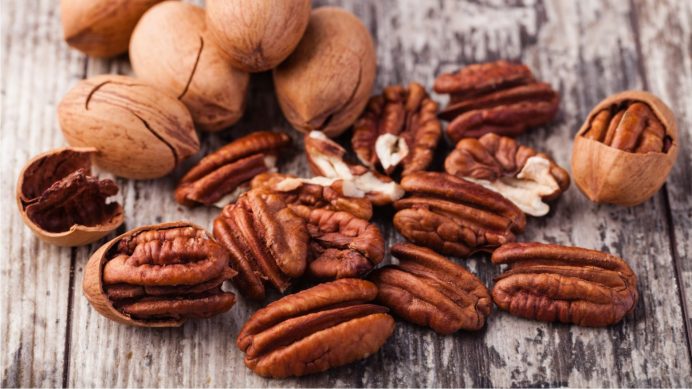 Pecans are not only one of the best tasting nuts out there, but they can play a very important role in staving off some aging related illnesses.

As seniors age, a whole host of problems get more difficult. Weight loss becomes harder and people become more susceptible to chronic inflammatory diseases. If that wasn’t enough, breast cancer and osteoarthritis also become problems. Thankfully, good and healthy nutrition can play an important role in offsetting some of these problems. Nuts and pecans in particular can play an important role.

Pecans contain healthy fatty acids and healthy fats like manganese. Manganese helps regulate sexual hormones as well as regulating carbohydrate metabolism and blood sugar which can help reduce weight gain. The healthy fats in pecans also send signals to your brain telling it that it is full thus establishing a sense of fullness and preventing overeating.

Pecans can play a very powerful role when it comes to reducing inflammation and may potentially help with inflammatory disorders like arthritis. A 2008 study concluded the following about nuts like pecans:

Inflammation is one of the recognised mechanisms involved in the development of atherosclerotic plaque and insulin resistance. Inflammatory or endothelial markers such as C-Reactive Protein (CRP), Interleukin-6 (IL-6), fibrinogen, Vascular Cell Adhesion Molecule-1 (VCAM-1) and Intracellular Adhesion Molecule-1 (ICAM-1) have been identified as independent predictors of cardiovascular disease (CVD) or diabetes in human prospective studies. Epidemiological and clinical studies suggest that some dietary factors, such as n-3 polyunsaturated fatty acids, antioxidant vitamins, dietary fiber, L-arginine and magnesium may play an important role in modulating inflammation. The relationship observed between frequent nut consumption and the reduced risk of cardiovascular mortality and type 2 diabetes in some prospective studies could be explained by the fact that nuts are rich in all of these modulator nutrients.

Not only nuts are great for reducing inflammation, but they are also helpful with diabetes and heart problems.

Pecans contain lots of oleic acid which is a substance that can help reduce the risk of breast cancer. Furthermore, pecans are also loaded with phosphorous which can help offset the development of osteoporosis among older women. Phosphorous also has the added benefit of decreasing bone fractures (through strengthening bones), a problem which is universally dreaded by seniors.

If you would like to try out pecans, you can buy them at good prices in bulk. You can add them to your cereals, yogurts, salads or just eat a handful of them.

Leave A Comment Cancel replyYour email address will not be published. Required fields are marked *
seventeen + 18 =