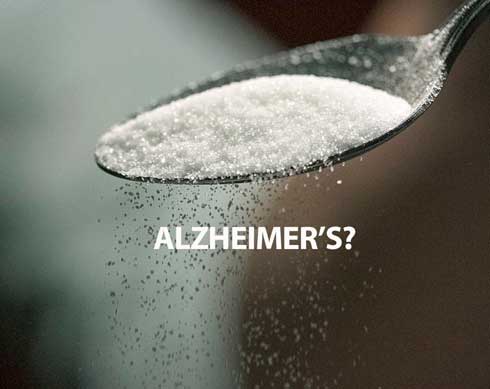 A new study is finding a link between excess sugar conception and the progression of Alzheimer’s.

Alzheimer’s is a condition in which abnormal proteins aggregate to form plaques in the brain. This leads to damages in the brain leading to cognitive and memory decline and eventual death. Recent studies are showing that excess sugar conception may lead to Alzheimer’s disease.

How does this work? Scientists have shown that excess glucose (sugar) damages a critical enzyme that is involved with the early stages of Alzheimer’s disease.

We know that high blood sugar is linked with diabetes and obesity, but up until now its link with Alzheimer’s was less known. Scientists at the University of Bath studied the brain samples of people with and without Alzheimer’s. The study showed that high blood sugar damages an enzyme in the body called “MIF” (macrophage migration inhibitory factor). MIF plays an important role in brain cell response to the build-up of abnormal proteins in the brain (and hence the formation of plaques) during Alzheimer’s disease. Scientists who conducted this research believe that the damage caused to the MIF enzyme by high blood glucose may be involved in the progression of Alzheimer’s.

Dr. Rob Williams who was part of this study says that “Knowing this will be vital to developing a chronology of how Alzheimer’s progresses and we hope will help us identify those at risk of Alzheimer’s and lead to new treatments or ways to prevent the disease.”

There are around 50 million people worldwide that suffer from Alzheimer’s. Almost 6 million of these people currently live in the United States. It is estimated that by the year 2050, there will be 125 million people who will suffer from this disease. This disease not only wrecks havoc in people’s personal and family lives, but it is also costing billions of dollars in medical and social care costs. It is thus more important than ever to follow a proper diet and avoid foods that make us sick, not only for our own sakes but for the sake of those around us.