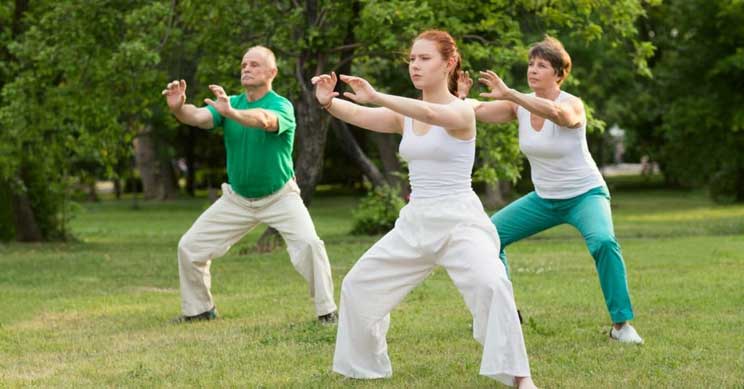 Qigong is a holistic form of exercise that involves special breathing and body techniques. As a stress reducer, it may contribute to easing autoimmune related symptoms like chronic pain.

Qigong (pronounced chi kung) is a holistic exercise of coordinated body movements with breathing and meditation that is used to healing and spirituality. The idea behind Qigong is that through its specific set of exercises, the practice may cultivate and balance the qi (chi) in the body. The qi in Chinese medicine and Daoist philosophy literally means “breath” but it refers to the life energy in the body. Practitioners of qi generally believe that much of this energy flows through the spine.

Some studies have shown that Qigong can be a useful form of therapy for helping people with autoimmune diseases. In a 2001 study, the following conclusion was made:

These preliminary studies in healthy subjects, although not necessarily representative of a randomized healthy population and not including a separate control group, have indicated that blood levels of the stress-related hormone cortisol may be lowered by short-term practice of Qigong and that there are concomitant changes in numbers of cytokine-secreting cells. Further studies of the effect of Qigong in patients with clinical diseases known to be associated with type 2 cytokine predominance are merited.

From a traditional medicine perspective, the results make sense. Stress is an important factor in exacerbating autoimmune disease.

From a Qigong perspective, it is believed that an imbalance of an energy system in the body leads to autoimmune diseases where the body mistakes healthy tissue in the body for unhealthy tissue. Proponents of Qigong explain the process in the following terms:

To put this concept in autoimmune terms, Chi Kung restores the immune system to a balanced state so that it now recognizes the difference between healthy tissue and toxins. Once this occurs an evolution occurs creating the elements which could eliminate the condition. Chi Kung is energy work that deals with the entire body and energetic system.

Because one doesn't pin-point nor concentrate on a particular area it is an all-inclusive healing. There are many benefits of using Chi Kung which may contribute to the ultimate processing and elimination of the disease. This relates to any disease not just those classified as autoimmune.

Qigong is generally a safe exercise. Even if you do not believe in its philosophy, its breathing and movement techniques are great for stress reduction which may help contribute to the easing of autoimmune related pain and symptoms.

Leave A Comment Cancel replyYour email address will not be published. Required fields are marked *
13 − seven =